Christina Bainbridge has another awesome giveaway up for grabs!  Head on over and check out her Monthly Checkoff  Chart Giveaway!!!!
http://bainbridgeclass.blogspot.com/2011/08/giveaway-time.html
Posted by Amy Trowbridge at 4:25 PM No comments:

Email ThisBlogThis!Share to TwitterShare to FacebookShare to Pinterest
Labels: Giveaway

I have been M.I.A. the past two weeks as I have attended multiple workshops regarding the new Math Common Core standards and Number Sense.  The first week I spent exploring the new Math Common Core Standards with my grade level colleagues.  This past week I explored what Number Sense is and worked on creating activities to promote number sense.  I thought this would be the perfect time to give away my first activity!!!
I bet you already have all the materials you need in your classroom! Even better right?  As it is the middle of August we are on a pretty tight budget around here these days!
For this set of activities you will need some dice and the accompanying sheets. The first activity is simply called "Roll, Count, Write." Each student will need a copy of this sheet as well as a die, or pair of dice depending on when you are using this activity.  I am planning on starting this in the Math center so I will show them how we roll the dice, (yes there is a whole lesson on this) and then how we "play" this game.    Students will simply roll the die, count the number of dots (until they start recognizing the amount of dots as numbers) and then practice writing the number of dots they rolled. 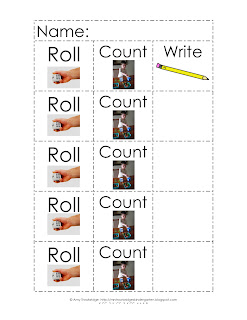 I am planning on using this activity throughout the year in the Math center. I will run this sheet back to back on card stock and then laminate them, so they can use dry erase crayons on them.  I will be able to adjust the level of difficulty throughout the year by having them roll more than one die.
Then next activity in this set is called "Roll, Tally, Write."  Same idea as "Roll, Count, Write" except this time you are incorporating tally mark practice as well as numeral writing.  I am going to run these back to back as well on card stock and laminate them again so they can be reused throughout the year. 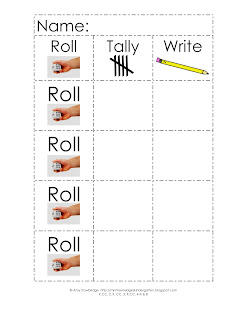 The last activity is called "Roll, Write, How Many?"  In this activity students will roll the die, figure out the number they rolled, and then represent that number with pennies. This way students learn to represent numbers another way. 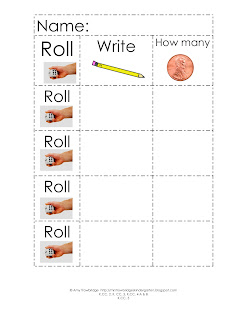 These activities address the following Common Core Standards:
K.CC.2- Count forward beginning from a given number within the known sequence.
K.CC.3- Write numbers from 0-20.  Represent a number of objects with a written numeral 0-20.
K.CC.4- Understand the relationship between numbers and quantities; connect counting to cardinality.
a: When counting objects, say the number names in the standard order, pairing each object with one and only one number name and each number name with one and only one object.
b: Understand that the last number name said tells the number of objects counted.  The number of objects is the same regardless of their arrangement or the order in which they were counted.
I have referenced the Common Core Standards that each of these activities address at the bottom of each activity.
I would love to hear how you promote number sense in your classroom.  I would also love to hear how you are addressing the new common core standards!  Have a great weekend!
Happy Counting!
Amy
Posted by Amy Trowbridge at 11:04 AM No comments:

I don't know about all of you, but I love a good giveaway!
And this is a good one!
Head on over to:
Eberhart's Explorer's Christmas in July Giveaway!
Good luck!
Posted by Amy Trowbridge at 1:15 AM No comments:

Three years ago I had the amazing opportunity to attend Primary Literacy Collaborative Coordinator Training at The Ohio State University.  I had amazing teachers who inspired me and got me excited about teaching again.  They also emphasized the importance of being a lifelong learner. I have always considered myself to be just that as I continually look for ways to improve as a teacher. After completing my training I decided that every summer I would choose two professional books to read.

My first read this summer was:

The Castle in the Classroom
Story as a Springboard for Early Literacy
By: Ranu Bhattacharyya

This book not only confirmed how I teach reading and writing but reminded me of the importance of stepping back and allowing your students to be free to create.

Now, I don't know about the rest of you but I may, at times, be a bit particular about the way we do things in our classroom.  Okay, okay I can be downright controlling! But this book reminded me of the power of letting go and letting your students take control.  This book gives you a look inside her classroom as well as some Focus lessons to help you, well, focus your teaching.

So if you are looking to be inspired, reenergized, affirmed, etc. about teaching balanced literacy this book is a must read!
If you decide to check it out I would love to know what you think!
Happy Reading!
Amy
Posted by Amy Trowbridge at 6:32 PM No comments:

Christina Bainbridge has a fabulous giveaway going on now!

Be sure to check it out!
Posted by Amy Trowbridge at 6:52 PM No comments:

I have been following (okay, stalking) many blogs for a while now.  When I am not teaching I love to cook and bake.  I have to admit I have been pretty obsessed with several cooking/baking blogs.  I also consult several fabulous teacher websites on a regular basis looking for new, creative ways to do things in my classroom.  A few weeks ago I discovered one of my favorite teachers, Christina Bainbridge, had entered the blogging world. I then discovered many other teachers she "stalks" in the blogging world! This has opened up a whole new world of resources! I love that these teachers are not only willing to share their wonderful ideas but also take the time to explain how they are using them in their classroom.  I have wanted to start a blog for a while now and reading all these fabulous blogs inspired me to finally start my own.  So here it goes!  Let the adventure begin!
Posted by Amy Trowbridge at 6:42 PM 2 comments:

Amy Trowbridge
I have been an elementary teacher for the past 12 years. I currently teach kindergarten in upstate New York. I love collaborating with other teachers. I am all about working smarter, not harder!

All blog posts are the intellectual property of the author, and are protected by international copyright law.

Words to Live By

Every great dream
begins with a dreamer.
Always remember, you have
within you the strength,
the patience, and the passion
to reach for the stars
to change the world.
~Harriet Tubman

Blogs To Check Out 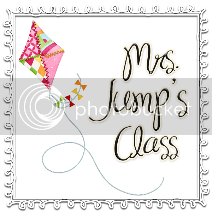 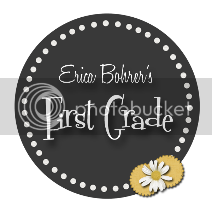